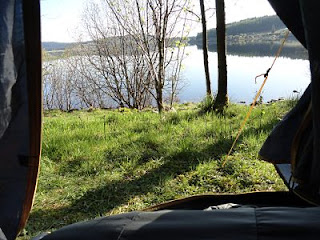 A glorious morning, and what a view to wake up to: the mirrorlike waters of Clatteringshaws Loch in the heart of Galloway Forest Park, right there in front of my tent (picture). And all mine: not another soul for, literally, miles. Not quite mirrorlike enough to see my haggard reflection clearly, which after two weeks of cycling is probably just as well. 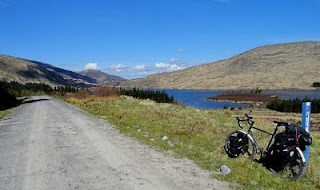 I went offroad 15 miles through fabulous loch and mountain scenery (picture) along National Cycle Route 7. Being a Sustrans 'trunk route', it was quite breathtaking: I had to keep gasping in amazement at how bad much of the surface was. Luckily I have 38C tyres on my tourer, though here, tractor tyres wouldn't have been out of place. 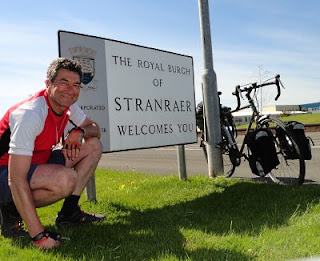 After a lot more lovely Galloway scenery on back roads - where 'rush hour' is a tractor and car in the same hour - I got to Stranraer mid-afternoon (picture). 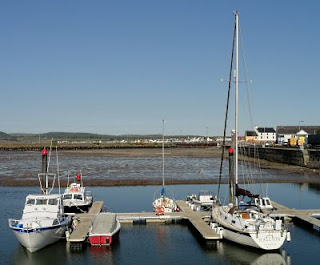 Stranraer's clearly not a boom town, and the relocation of the Stena ferry port in 2011 to Cairnryan, up the road, hasn't helped. Even the poundshop here has closed down. The harbour (picture) was hardly bustling, but the Custom House pub certainly was, with lots of families, and locals, and bike bloggers using the wifi.

Dunbar to Stranraer has been a memorable and very pleasant trip, with some of Scotland's less-visited but glorious scenery. There were some of the most enjoyable downhills I've had in Britain, and two of the most beautiful and memorable campsite (both by lochs). But, er, just as well I didn't come here for the beer.

Posted by Rob Ainsley at 8:15 PM No comments: 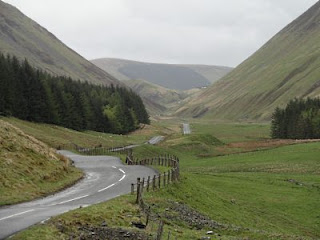 It rained all night, and it was a miserable cold squelchy start from the lochside campsite. Even the mad hen was taking shelter. But with a hefty tailwind, the long downhill into Moffat was a delight (picture). As was Moffat itself, a handsome town with a good line in cherry trees and Scotch pies. 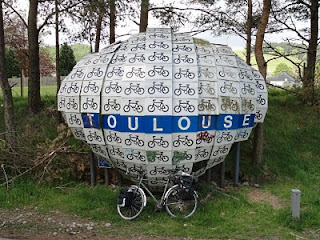 Outside Moffat, on a Sustrans route, was this intriguing sculpture (picture). Having recently been cycling in Toulouse, I couldn't quite see the connect between the aircraft industry and Scotch pies. 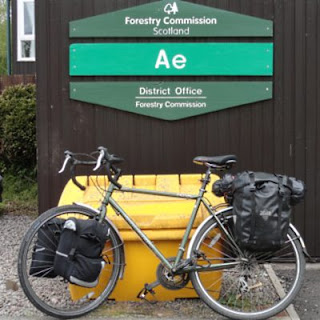 Having been through the longest village name in Britain on a previous Rhyming Coast to Coast, I couldn't resist dropping in to Ae (picture). It's the shortest place name in Britain, and home to some excellent mountain bike trails in Ae Forest. There's also Ae Bike Shop and Cafe. It used to be written Æ, as a single-letter ligature, apparently. 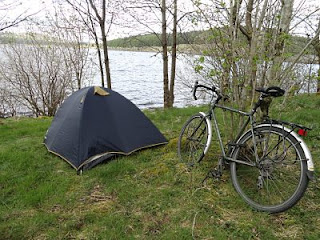 After quite a lot of pleasant backroads I got to Galloway Forest Park, and camped wild by the side of Clatteringshaws Loch (picture). I had the entire place to myself, and had no shortage of water to brush my teeth with. 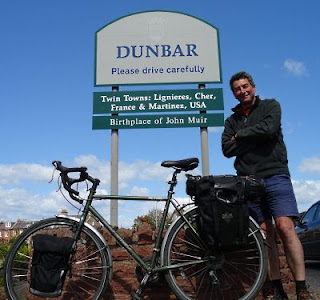 So, this morning I left Dunbar (picture). A friendly small town that acts as the administrative centre for the agricultural area and a dormitory town for Edinburgh, it's the home of John Muir, who established the conservation movement; Belhaven Brewery; a nuclear power station; a fishing harbour; and a cement factory. A mixed economy, I'd say. 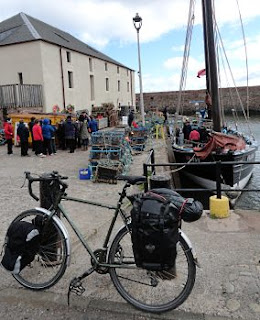 By chance, the hundred-year-old herring boat The Reaper - Scotland's oldest working fishing boat (picture) - was in the harbour, and it was free to board and look round. In lieu of being able to dip my front wheel in the water, this seemed the best way to officially christen the ride. As for the herring, apparently there are none left. We've eaten them all. 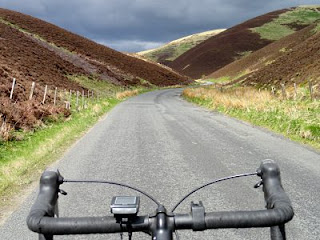 After some humdrum scenery west of Dunbar, things suddenly got beautiful with the B709 from Heriot (picture). Lovely scenery, and the rare treat in Britain of a flat smooth road with virtally no traffic running through it. The final eight miles, thanks to a 20mph tailwind and consistently gentle gradient, were one of the best cycling downhills I've ever enjoyed: a steady 20mph freewheel winding down through the hills. Being chased by a monster raincloud borne by that same 20mph tailwind, which added a frisson. 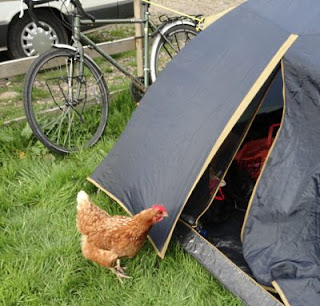 The B709 continued in similar vein after the mountain bike centre of Innerleithen, and I camped at the Tibbie Shiels Inn at the end of St Mary's Loch, which is superbly scenic, and coincidentally has a pub of the same name next to it. There's a mad hen which wanted to get into my tent (picture) and apparently tries to board buses.