A delightful day of windless sunshine up the flattish north-east coast. After the headwinds and hills of the previous two days, my bike felt like an electric-assist model. 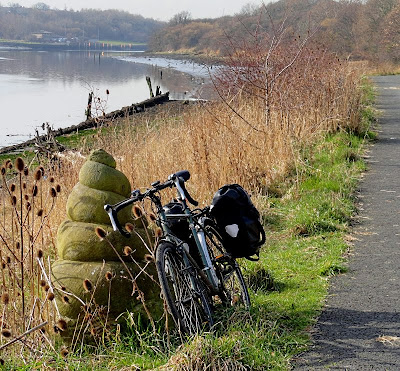 I struck north from Durham this morning to Chester-le-Street, where I joined the Coast to Coast route east to Sunderland. On the rare bit of scenic path on that stretch, running alongside the Wear, was this Sustrans sculpture. As you know, they often commission artworks that reflect things local to the area that you see a lot of en route, such as this one, of a dog turd. 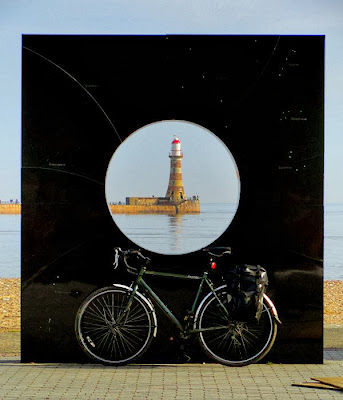 At Sunderland I passed by the endpoint of one of that Coast to Coast route, marked by this rather splendid monument.

The route from there north along the coast to Newcastle is glorious - perhaps it's the surprising abundance of light, air, greenery and space that makes it such a pleasure. On a sunny day like today, with friendly locals stopping to chat, it was an utter delight.

Greggs, the bakery chain, comes from Newcastle, and in its home town, every other shop is a Greggs - as you can see from this snap of King St, in South Shields. 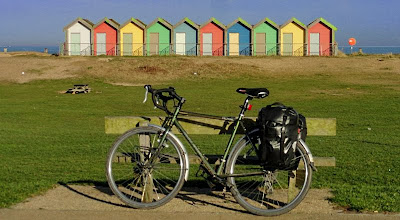 The Shields Ferry took me over the Tyne for more lovely coastal riding, with big fresh skies and wide spaces, up to Blyth. Beach huts - yes indeed, they do have them.

I finished in country park just outside of Ashington, in a prebooked Premier Inn. I can promise you, the pleasure of reclining in a steamy hot bath listening to Radio 3 with a bottle of wine, bag of crisps and Co-op cheese sandwich after a full day's cycling never seems to lose its novelty.

Lots of hills and headwinds today, but I didn't swear once. That once was at about 4 o'clock. 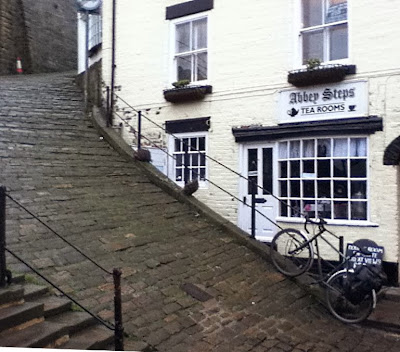 From the hostel it was all downhill into Whitby, some 100m away. Very steeply downhill, as you can see. The road, Donkey Track, is marked 'Unsuitable for Motors'. Indeed. At the bottom, this photo suggests that the gradient is around 60 to 70 per cent. That would make it possibly the steepest in Britain, more precipitous even than the 40 per cent Fford Pen Llech in Wales. Wow. After climbs of max 6 per cent yesterday, and evening beers of about the same, that raises the bar for tonight's drinking. 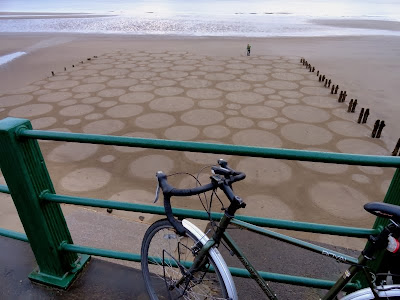 My early start was rewarded by this curious sight at Sandsend, just north of Whitby, around 8am. A bloke was out on the beach making circles with a rake into this splendid little art happening. Not a commissioned piece, just something he was doing for fun - though he is an artist, part of the small arts organisation www.responsiblefishinguk.co.uk. 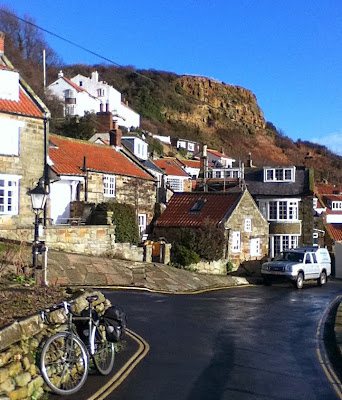 I dropped into Runswick Bay, a fabulous little cousin of Robin Hood's Bay with all the same sort of fishing cottages crammed up no-road-access steps, but without the twee tourist shops. I couldn't show you the picture at first because I took it on my iPod which I then lost. But it's now been returned thanks to the residents of Runswick Bay who found it, called up the first person on my contact list (Sue and Si, hello) who called me and I organised its safe return. People are great. I like People. 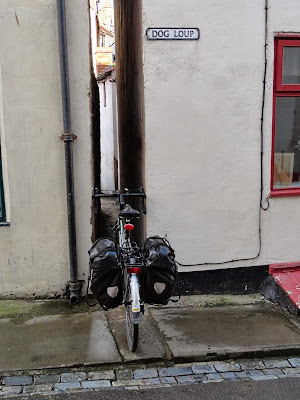 Next up the coast was Staithes, another delightfully quaint 'fishing village', ie a village full of artists. It has the narrowest alley in Britain: Dog Loup, just up from Captain Cook's Cottage on Church Street.

It's too narrow for my bike handlebars, and at 15.5 inches wide - I measured it - it's comfortably narrower than the much-hyped Temple Bar in Port Isaac, Cornwall, usually cited as Britain's tightest squeeze. Interestingly, this bit of Staithes is not on Google Street View, whose spy-cars evidently couldn't get down the narrow lanes to the harbourfront. Ha ha! Yorkshire wins again! 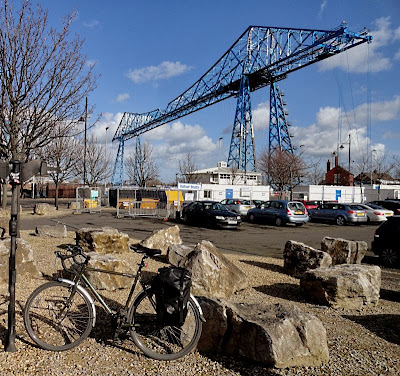 Lots of hill-climbing, wind-bashing and train-cheating later, I got to Middlesbrough, home of the famous Transporter Bridge. Middlesbrough is the sort of place that makes you want to get on your bike straight away. And cycle fast as possible out of it.

From Middlesbrough to Durham I tried to go by National Cycle Route 1, which looked promising - with a very long railtrail going 20 miles or so north from Stockton - but most of it was too muddy, so I took refuge in the road. Still, as the old Yorkshire saying goes, 'Where there's muck, there's a Sustrans route'.

F2B1: (Bridlington to) Flamborough to Whitby

This is the latest Rhyming Coast to Coast: Flamborough to Bamburgh, F2B.

Pedants among you will protest that it isn't a proper Coast to Coast as it doesn't cross the country, and merely follows a shoreline. But they rhyme and it looks fun, and I'd rather be happy than right any day. I'll tell you when it's the day. 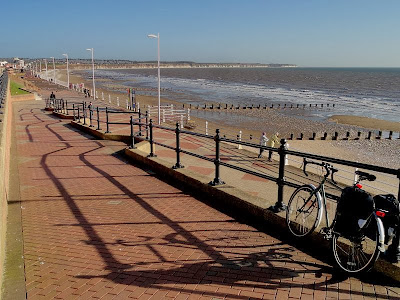 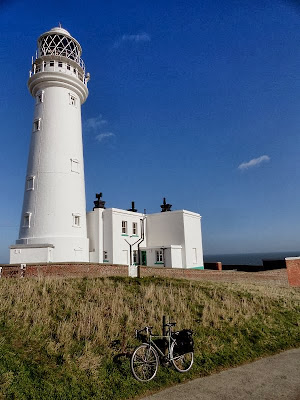 Flamborough Head is famous for its two chalk-and-cheese lighthouses: one made of chalk in 1669, and this one made of, er, bricks in 1806. 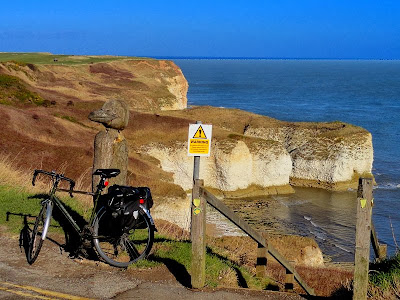 This bit here was the site of a sea battle in 1779 between Britain and America, who beat us 2-1 after extra time. 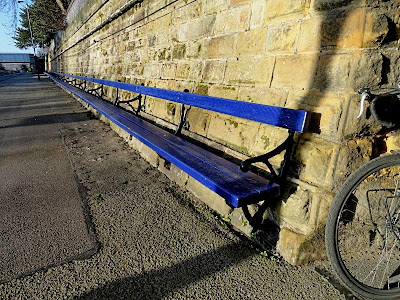 At Scarborough station I had a sandwich break on the longest bench in Britain. It's on Platform 1 and is 139m long. I had it to myself, which was just as well, as I don't like sharing a bench with other people.

From Scarborough to Whitby I went by National Cycle Route 1: the 21-mile Cinder Trail, which follows an old railway line. I've been critical of it in the past: a potentially fabulous rail trail with some superb coastal views was spoiled by an awful surface, very rough in places, and deteriorating every year. Well, I'm glad to say that at last some action has been taken... 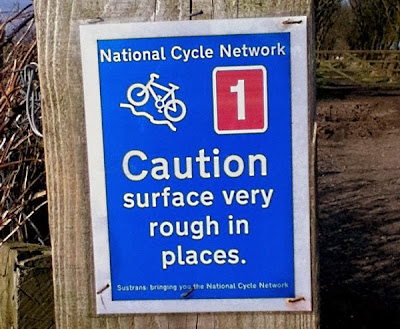 I'm in Whitby Youth Hostel tonight, which is stunningly situated next to the Abbey, high on the promontory overlooking the town and harbour. That means it's 199 steps down to Wetherspoons and 199 steps back up.