Another glorious day of bluesky coastal cycling, a day of space and air and seasmells and freshness and fish and chips. And some lager drinking with Newcastle fans.

From Ashington I headed east out to NCN1, which runs picturesquely up the coast. It was (mostly) fab, a series of backroads and not-too-muddy-tracks and paths that gave expansive views of the sea and sand and cowpats. Some of the dunes scenery reminded me of the Netherlands, if not quite the standard of cycle-track surface. 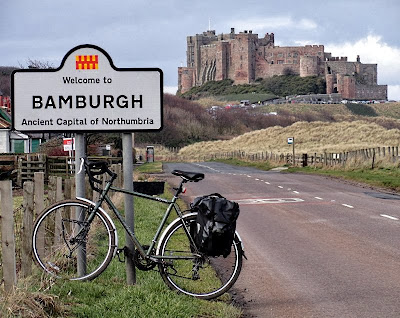 Alnmouth, Craster, Seahouses, and several cups of coffee later, I reached Bamburgh at 1.30pm. The castle glowed in the low late-winter sun, and lots of runners on a Big Event were arriving one by one, cheered in by friends and relatives in woolly hats. I would have taken a photo of them, but they were running much faster than I was cycling. 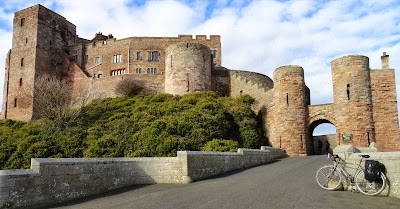 The castle proved a splendidly suitable terminus for the trip, with a real sense of arrival. I wanted a sense of fish and chips, though, so I went back to Seahouses. 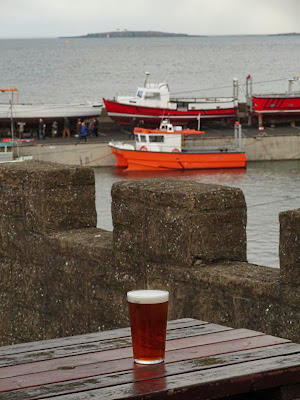 Seahouses also provided a friendly tourist info who directed me to the smokehouse, where they smoke fish, whatever turns you on. They also suggested I drop in on the Olde Ship Inn, a pub-cum-maritime-museum, in whose beer garden I had a pint of Farne Island overlooking the Farne Islands. A beer full of grace, darling.

I got the train home from isolated Chathill station via Newcastle. Quite a few Toon fans were there, bantering about their eventful match with Hull today, in which their manager head-butted one of our players. They gave me a can of lager as compensation.

It's been another excellent little rhyming bike trip, with stirring coastal scenery, friendly locals on hand when Sustrans signs were ambiguous, which was much of the time, good beer, cosy cheap hotels, and several quirky things en route.