This trip is another Coast to Coast: Ravenglass (out west, in Cumbria, a bit north of Barrow) to Ravenscar (out east, a bit north of Scarborough). Not exactly rhyming, but maybe someone knows a technical term for when two similar things begin the same way, like 'shampoo' and 'champagne'. 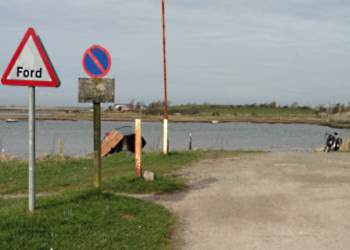 Ravenglass has a Roman Bath House, and a nice line in ludicrously uncyclable fords, such as this one (above). 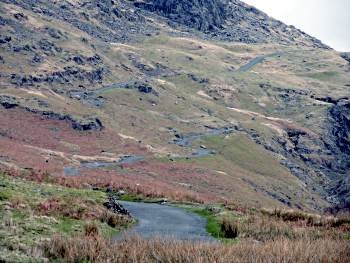 From there I went along Esk Dale and up Hardknott Pass (above). It used to be an assault course for tanks and was only tarmacked after World War II.

Its 1 in 3 bits may not be quite as steep as Rosedale Chimney Bank in Yorkshire, or Harlech's Ffordd Penllech, but I can promise you, it's much more challenging than either. Even Bwlch y Groes is only a one-biscuit hill; this is a three-biscuit hill.

It's brutal. You'd have to be slightly mad to try and cycle up without stopping several times for, say, a biscuit and drink and pretend-photograph break and defibrillator stop. Si and Mark have cycled up it without stopping. I rest my case.

After that was some delightful Lakes scenery and villages (including Hawkshead, a quirky little gem) and – via the ferry across Windermere (£1 for bikes) – the final roller coaster to Kendal, which is endowed with a Booth's (£1 for beers).

Kendal also has a marked route that takes you all round the town, bringing you back right where you started; just follow the signs to anywhere and get caught in the one-way system.