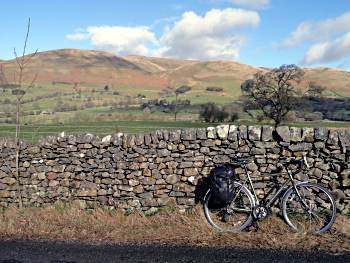 Glorious cycling with breathtaking scenery today (lots of this sort of stuff, above), in lovely weather: the forecasters were Michael-Fish-wrong, having promised daylong showers which never materialised, rather like the payments for the freelance work I do for Sky Arts.

From Kendal it's all up and down stuff to Sedbergh, which is STILL IN YORKSHIRE WHATEVER THEY SAID IN THE 1974 BOUNDARY CHANGES SO THERE. 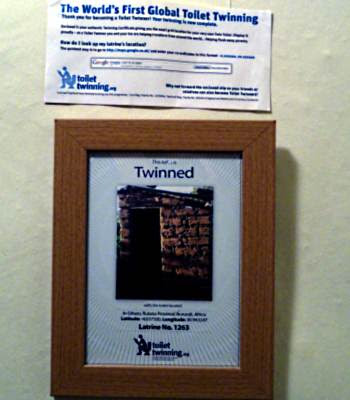 Sedbergh is spectacular, with the Howgills looming over it like a massive green breaking surf. It also has a nice line in 21st-century Yorkshire cafes: twelve types of gourmet coffee, free wifi, and a toilet trendily twinned with a crapper in Burundi (above), but toasted crumpets too. (Yup, Toilet Twinning is a real, and serious, scheme.) From Hawes I went up and over Buttertubs Pass (above) to Swaledale, which was quite glorious. A big fat tailwind conveyor-belted me to Reeth (where I sat out the only precipitation of the day, five minutes of snow, in a bus shelter, and where I once had to kill a rabbit with my bare hands), Richmond, and Northallerton (where I ate fish and chips with my bare hands).