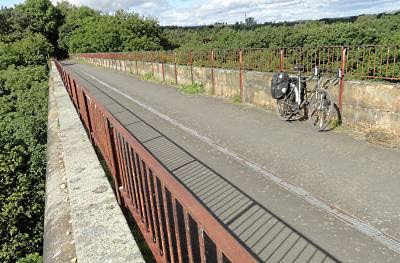 Most of today’s short concluding run was on NCN14, the well-surfaced railtrail (picture) that takes grateful C2Cers downhill from Consett into Newcastle.

It has two sorts of ‘Cyclists: Slow’ signs. One is because there are narrow barriers coming up at a road crossing, in which case you should slow down; the other also says ‘Give way to walkers’, which means there’s a long straight bit coming up, so you know you can go really fast.

Somewhere round Ebchester I was delighted to see one man and his dog rounding up some sheep (picture), whistles and all.

I once wrote a duet for flute and guitar about border collies. They’re the most intelligent breed of dog; one has a vocabulary of 1022 words.

That's 1000 more than I heard from any of the stag and hen parties in Newcastle who were getting stuck into the Stella at Wetherspoons when I arrived there for breakfast at 10.30am.

I got to Jarrow about noon and visited Bede’s World, a rather good modern museum dedicated to the great 7th-century scholar the Venerable Jeremy Beadle.

He not only figured out how tides work, established the BC/AD system of dating years, and came up with a formula to determine the date of Easter, but he also invented the footnote.* Sadly, his historic first footnote has not survived. 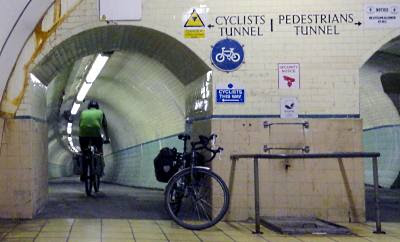 Jarrow is also famous for the Tyne Tunnels, which include a pedestrian-only and cyclist-only tunnel (picture). They were made in 1951, about the same time as the fish and chips I had in Patterdale hostel.

As there was nowhere to dip my wheels into the tidal Tyne to finish the trip officially, the tunnel seemed an appropriate endpoint. Better than Greggs, anyway.

I’m rather enjoying the way these arbitrary routes between rhyming termini produce a mix of expected and unexpected pleasures. This has been three fabulous days of awesome scenery, thrilling climbs and descents, and rural and urban slices of life; another lovely cross-section of England.