We (me and Nigel) have arrived in Lynmouth, on the north Devon coast, to start the Lynmouth to Teignmouth rhyming c2c tomorrow.

We got here by cycling from Plymouth to Ilfracombe along the Sustrans Devon Coast to Coast route. And then by pushing from Ilfracombe to Lynmouth, thanks to north Devon's boom-and-bust ups and downs. 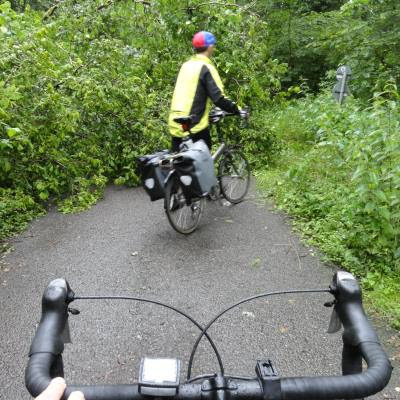 When it's not climbing up or plunging down 1 in 4 hills on breathless back lanes, much of the route goes on railtrails. Dr Beeching was clearly a fan of leisure cycle routes, to judge by how many rural rail lines he axed to create them, though he appears to have axed a few trees too (above). 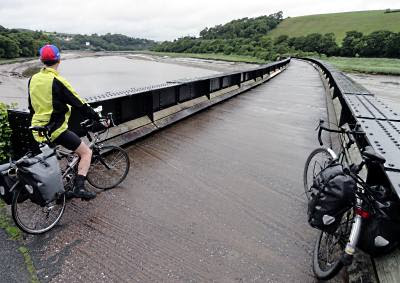 Many of the railtrail bits run on smooth tarmac (the Drake Way out of Plymouth, Granite Way up to Okehampton, Tarka Trail up to Barnstaple) and they feature some awesome viaducts (above) and tunnels. We preferred the tunnels because, unlike the rest of Devon, it wasn't raining there. It was just dripping. 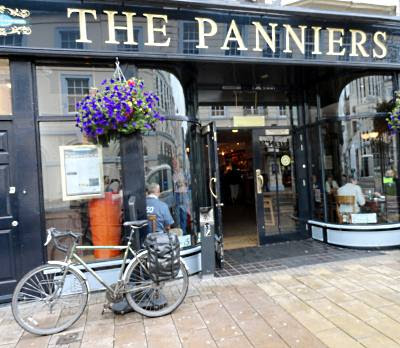 In Barnstaple we found Britain's most suitably named Wetherspoons for cycle tourists (above). 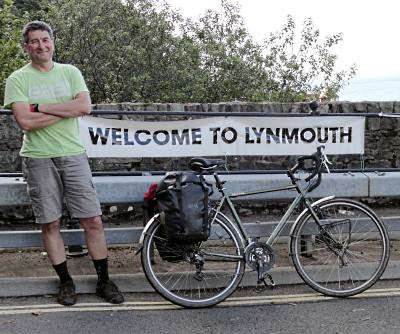 Anyway, after two and a half days of rain, we had the novelty of seeing our shadows in time to arrive at Lynmouth (above) and prepare for the trip proper to begin tomorrow morning.
Posted by Rob Ainsley at 11:47 PM