I'd rather have been on my bike, but... this was an enjoyable day on a succession of trains from home in York up to the Inner Hebrides. I'm doing Mull to Hull, which barely qualifies as a 'rhyming coast to coast' seeing as Mull is an island, not a locality. But it's Scotland in May, so why not? 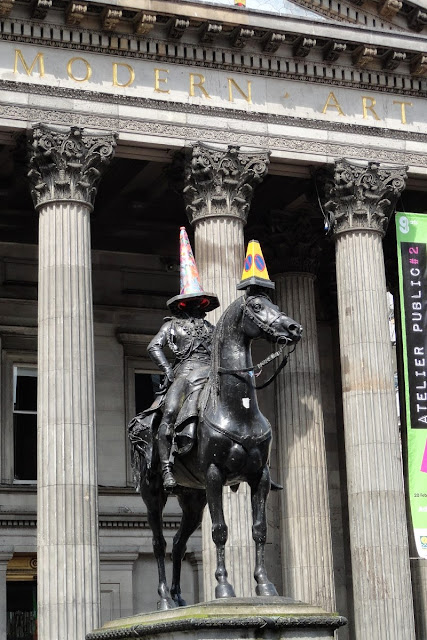 During my Glasgow stopover I was pleased to see that the Modern Art Gallery (picture) had this witty piece of Modern Art outside. I'll leave it to you to fill out the pretentious nonsense describing Turner-Prize exhibits like this ("deconstruction of urban semiotics... traffic cone as exemplar of restriction on internal combustion engine retrospectively applied to horse... asks fundamental questions..." etc). Unless it's students, in which case little has changed since I was at uni. Several times.

The train up to Oban went past spectacular scenery bathed in radiant sunshine. As soon as I arrived it started throwing it down with rain, and I got the ferry across to Craignure on Mull (picture). Given the rain, it wasn't a hard decision to stay at the village campsite in Craignure and invest responsibly in the local. Er, I mean, the local economy. 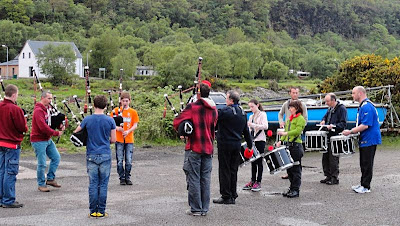 On the way back to the campsite there was this local bagpipe band practising at full throttle. Curiously, there were no midges. Perhaps this was why bagpipe music was invented.