A very early start - I had taken down the tent and was out from the campsite in Moffat by 6am - so that I wouldn't have to lay in bed being disturbed by early risers taking down their tents. Sound travels in campsites. 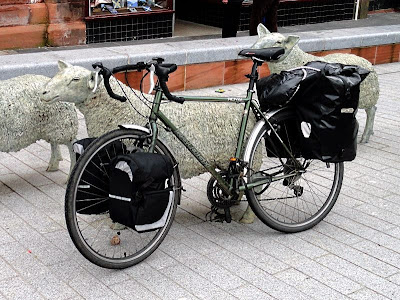 I had breakfast at Lockerbie, where I was not impressed by the cycle parking in front of the Town Hall (picture). Sheffield stands would have been so much more convenient than sheep-shapes. 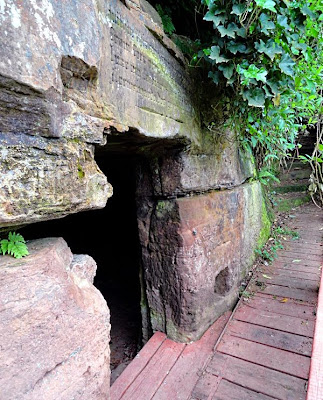 Further down the old A74, now the smooth, fast, almost traffic-free, but tedious, NCN74, I dropped into Robert the Bruce's cave at Kirkpatrick Fleming (picture). I came here a few years ago intending to get a photo of a spider spinning a web, but didn't succeed. So I came here once more to try again, but without luck. So I think I'll give up. 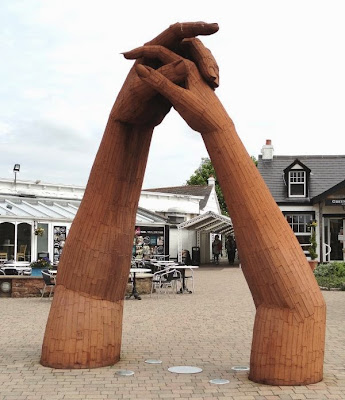 A short distance down the road is Gretna Green, famous as the place pre-18s with disapproving parents would elope to wed under Scottish law. Now it's a slightly tacky tourist coach-stop, as demonstrated by a piper on photo-display for tips, a retail outlet, and this curious sculpture (picture) of a couple arm-wrestlling for custody of the kids. When it comes to marriage, Bruce's dictum does not apply. 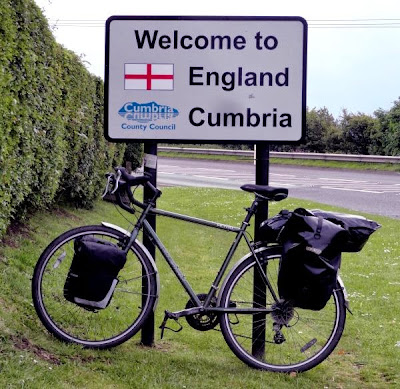 The Border With England (picture) - the River Sark, pub quiz fans - is a few hundred yards south. Next time I cross the border, could Scotland be an independent country? Well, no, because I'll be back in July.

Anyway, I whizzed down to Carlisle (unlimited coffee refills in one of the two Wetherspoons on Botchergate) and then to Penrith, where it was a heartbreakingly beautiful sunny evening. Just as well, seeing as the weather forecast for tomorrow is incessant heavy rain and headwinds...