I left Ayr without further investigation. I'd done all the jokes about Robert Burns and John McAdam I could think of last year, when I passed through on my multiple End to End trip.

Today was always going to be a bit of a slog, east across from Ayr to the old A74, and then down that road towards Moffat, especially as it rained much of the morning. I proved that my new rear Ortlieb panniers are completely waterproof. And that my new front Halford panniers aren't. 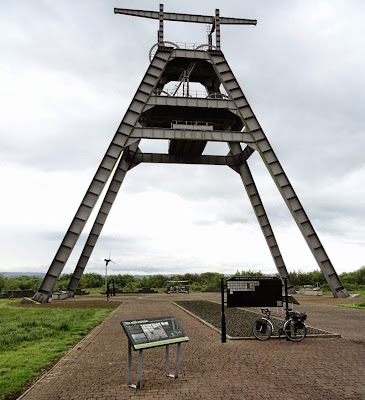 In Auchinleck I kept seeing signs for 'Barony A Frame', which I thought must be some sort of Disney character, but in fact it was this remnant (picture) of the coal mine that was here, now left as a monument to the lost industry. 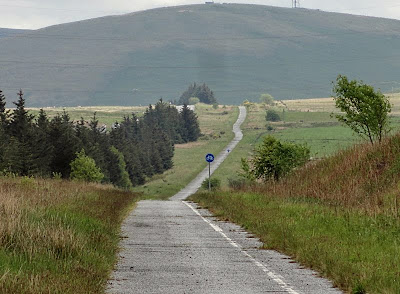 The old A74 is now a virtually unused series of roads, and also a Sustrans path, NCN74 (picture). A curious experience, because it's on such a big scale. Normally on a Sustrans route you get a concentrated sense of things happening: within 15 minutes you might cycle along a towpath, by the side of a road, through a housing estate and scruffy park, then alongside a derelict battery-acid factory via a dump, for instance. But this gives you no such sense of achievement, even if you're bombing along at 15mph, because the views just never change. 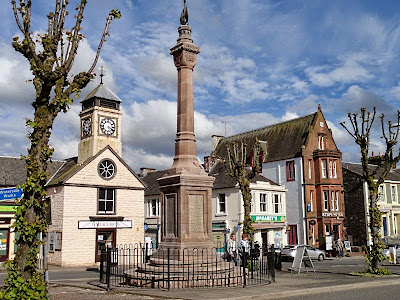 A joyous freewheel in the sun down the A701 with lovely scenery got me into Moffat, a handsome town with what's said to be the thinnest hotel in the world (picture, on the far right). And I thought you couldn't get anything thinner than the Eagles' Hotel California.

Anyway, I won't be staying here. I'd never get my bike inside with those Ortliebs.